Welcome to the first Bike Sutras blog post. It was written just before heading into the Boom festival where I had a blasting opening ceremony! But I’m only posting it now, sorry. Although I am finding equanimity in bearing its many challenges, I am extremely happy and enjoying every minute of the joy and pain involved in the ride. I have faith and no fear!

Arriving in Portugal, I could already feel the magic of travelling on two wheels. People were watching me with my big box and bags, wondering what on earth is this guy doing?!?! Some came and asked, and of course I was more than happy to tell them about Bike Sutras.

The very first day was all about relaxation. I left my bike at the hostel and went visit an old friend: Marianne, who I actually met 10 years ago at the boom festival =] =]=] She’s been living in Portugal ever since and now runs a lovely guesthouse in a beautiful village called Almoçageme, near Sintra. We took the dogs for a walk, had a delicious lunch at local restaurant, went to the beach, had wine and pizza, and of course had long overdue chats. The next day after lunch, she dropped me at the train station and I went back to Lisbon to pick up my bike and start the trip!

On August 4th I took a ferryboat from Lisbon to Montijo, crossing the Tejo river towards the Alentejo region, where I’ve been riding through the beautiful rural scenery, meeting lovely people and trying amazing food for a few days. In my first night on the road, I stopped at Pegões to ask locals if I could pitch my tent in their backyard, which is where I met Paulo. He also shares the passion for a bike ride and was very interested about my trip. We spent quite some time chatting over a beer.

On the next morning it took me quite a while to prepare tea, breakfast and getting my things organised for the first time, hence I left late and stopped for a quick lunch at Vendas Novas after riding only a few kms. There I could try the traditional Bifanas, which is a regional specialty pork sandwich, at a place recommended by Paulo and it was absolutely delicious! I ended up riding the entire afternoon under extremely hot and dry weather conditions and with only a few quick breaks to refill my water bottle and eat fruit by the road. I arrived to Evora exhausted, where I camped at a holiday park and chilled by the pool. In the night I went sightseeing at the historical center and treated myself to a delicious meal at Botequim da Mouraria, which is a highly recommended restaurant!

I left Evora early in the morning towards Elvas and rode 45km before stopping for lunch and resting at a small town called Redondo. Here, I practiced yoga, had a long lunch, worked on the website and had a quick siesta waiting for the heat to ease off. However, it was still extremely hot at 5pm, so I had to leave regardless of this and finish the remaining 50 km. After riding only 20km, I was very tired and considering stopping before Elvas. That was until Armando stopped and offered me a lift to Elvas. He too, likes to ride MTB in the region and invited me to eat the traditional Guaspacho Alentejano (similar to Brazilian vinagrete) at his friend’s place (“Resort dos Covões”). There I met Gordo, his family and friends. They were all lovely people and we spent hours chatting, eating and drinking. In the end, I stayed at their place for the night and left early in the morning to see Elvas’ famous aqueduct and avoid the heat.

It was definitely worth leaving early as by lunchtime, I had reached my destination (Portalegre) after a smooth ride through the beautiful countryside scenery. But the actual town was located on top of a very steep hill, so I had to climb cobbled roads for an hour to get to a cheap hotel, where I spent the day resting, doing washing and organising my stuff. It was certainly a good exercise of equanimity =]

From Portalegre, the plan was to ride to Marvao, which is on the top of a mountain and then try to get as close as possible to Castelo Branco. The ride up to Marvao was very difficult (20 km uphill for almost 4hrs!), but it was a wonderful feeling to get to the top! The village and castle were beautiful. From there I had amazing views of the whole region around the border between Portugal and Spain. The downhill was exhilarating, but again I got back on the road a little late and had to continue under the heat. After stopping for lunch, a guy called Egon who was going to Boom in his motorhome asked for directions to Castelo Branco. I explained it to him as I was also going there, and he kindly offered me a lift, which I accepted. After all that riding under the sun and taking on the hills early morning, I scored myself a break. In the end, I went with him all the way to Idanha-a-Nova, which is only a few kms from Boomland. This saved me a day of riding from Castelo Branco, which had nothing special to see, and it gave me an extra day of resting before the festival.

In Idanha-a-Nova, as I was riding to the local camp site and I met Felix. He was a French cyclist who rode all the way from Lyon to Boom. Legend! We joined up to get groceries and do a few other things in town before going camping. He was a very cool guy and could speak fluent Portuguese, so we had a great time together! At the campsite I got to rest and meet a nice bunch of people, in particular, Eduardo’s family who were camping besides me and Marie, who I shared dinner with. I also met, Andre, a German cyclist who came from Hamburg to Boom, and we rode together the next day towards the Boom pre-camp.

When I got my boom wristband, I’ve met Jonas. He was another German cyclist who came from Berlin to Boom. He was very cool, could also speak Portuguese, and also was into yoga and meditation. Definitely a Dhama brother! We spent the night together with other fellow cyclists and left early in the morning (5am) to be the very first people to enter the Boom land. It was absolutely amazing to ride to the Boom with a peloton of likeminded cyclists and enter the festival when it was still completely empty.

Overall, the journey to Boom was incredible! The ride was full of emotional ups and downs, of which I expected and welcomed in my continuous growth toward developing equanimity.

Check back soon
Once posts are published, you’ll see them here. 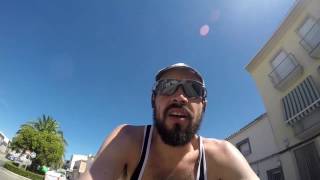